You are here: Home / News / Tornado knocks down trees in Johnston 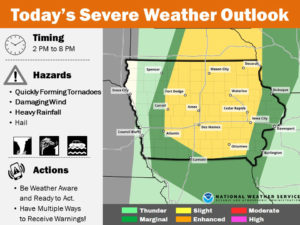 Clean-up is underway in the Des Moines suburb of Johnston after a tornado touched down about 6:30 last night.

Meteorologist Roger Vachalek at the National Weather Service says the twister was relatively weak and only lasted about three minutes, but still caused plenty of trouble. A weather service team was out within minutes, surveying the damage.

“We came up with an EF-1 rating for the tornado,” Vachalek says. “The estimated winds were 95 miles-per-hour. It traversed about 1.6 miles of Johnston and the maximum width of it was 50 yards.” Large trees were uprooted with some limbs tearing down utility lines as they fell, while several houses had damage to roofs and siding.

“A very quick-forming and quick-dissipating tornado that was down and up in a matter of minutes, but it did do some damage,” Vachalek says. “Fortunately, there were no injuries or fatalities with that.” Vachalek says there’s the potential for more severe weather this afternoon and evening.

“Today, we have a slight risk over much of central Iowa and between around 2 o’clock and 8 o’clock this evening, we will see some storms moving north very quickly across the region and we may again see some tornadoes developing with those that form very quickly.”

Wind gusts up to 67 miles-an-hour caused more damage last night in Newton, and strong winds tore the roof off a barn in Dubuque County, slamming debris into a neighboring barn that collapsed, killing some 300 hogs.