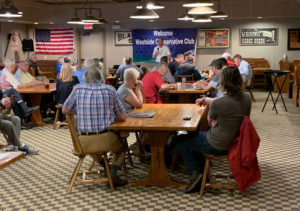 The Westside Conservative Club routinely hosts the state’s Republican officeholders and candidates for the presidency as well as state and local office. Early this morning, the club resumed its meetings at The Machine Shed restaurant in Urbandale.

State Senator Brad Zaun, the invited speaker, began by saying it’s time to reopen the state. “Sometimes I believe that the cure is a lot worse than the disease and I think we’ve learned a lot of lessons about what’s going on here,” Zaun said.

The pandemic has caused “astronomical” financial and societal problems, according to Zaun, but Zaun defended the steps Republican Governor Kim Reynolds has taken.

“She’s damned if she does and damned if she doesn’t,” Zaun said. “…She has done the best job she can…This is a learning experience for all of us. We didn’t know. We were told by all these professionals that our emergencies and our hospitals would be overloaded…It didn’t happen and it’s probably because of the decisions that the governor made.”

Zaun and other state lawmakers are scheduled to restart the 2020 legislative session next Wednesday. Zaun cited estimates from national financial research firms indicating Iowa tax revenues will be about $800 million less than expected due to the pandemic’s economic hit.

“Obviously, we’re going to have to cut and it’s not going to be fun,” Zaun said, “but it’s the responsible thing to do.”

The audience for today’s Conservative Club meeting was far smaller than normal, about two dozen people. The club’s leader urged members to leave extra large tips for the restaurant staff to help make up for their lost wages and hours during the pandemic.