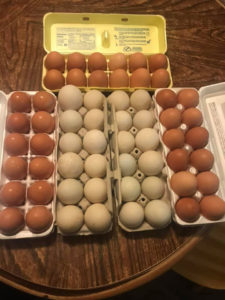 More Iowans are buying food directly from farmers during the pandemic, with Facebook groups and other social media connecting producers and customers.

Jenna Anthofer of Breda started the group IA Farm 2 Table on Facebook May 10th and now has more than two-thousand people signed on from Iowa and neighboring states. She says the group is strictly for direct-to-consumer sales of farm products and is her reaction to the challenges COVID-19 has thrown at farmers.

“I really just wanted to help offset that, if possible, by hooking up farmers and producers with consumers,” Anthofer says. “I’m actually in a larger nationwide farm-to-table group and they had suggested that each state have their own sort of offshoot branch.”

Anthofer says it’s easy enough to find buyers for vegetables, eggs, honey and processed meat, while she says many people are newly-interested in buying meat directly from farmers. “Not everybody feels confident buying a whole pig and then having to process it themselves,” she says, “although I’ve tried to put some resources in the group for people. It’s not that hard to break down a hog, here’s a video to show you how to do it.”

Across the Midwest, people are using websites, Reddit, op-ed pieces and other tools to spread the word about buying food directly from farmers. Reddit users compiled a list of “farms that are delivering” and launched a URL with that name.