You are here: Home / News / Governor comments on death of Minnesota man and Minneapolis riots 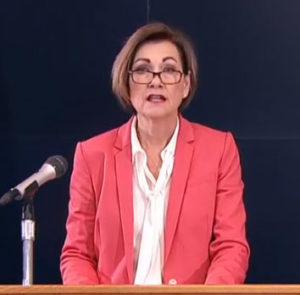 Iowa Governor Kim Reynolds says the video showing the death of a Minnesota man in police custody is heartbreaking, but destructive protests aren’t the answer.

“As Americans, we have a right to peacefully protest and we should, but riots and violence serve nobody,” Reynolds says. “That doesn’t even do justice to his memory.”

Reynolds says her prayers and condolences go out to Floyd’s family and she says justice must be served.  A gathering is planned at the Iowa capitol tonight to protest the death of George Floyd.

“Riots and violence are not the answer, especially individuals who had nothing to do it, you know, to extend that devastation to them,” Reynolds says. “I know Iowans will do it right and they will do it in a peaceful manner and they have the right to do that.”

The former Minneapolis policeman who knelt on Floyd’s neck has been taken into custody.