You are here: Home / Health / Medicine / U-I study finds rain can prolong the impact of pollen for allergy sufferers 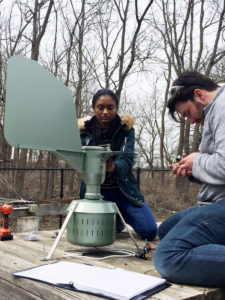 A University of Iowa study finds tiny tree pollen particles can hang in the air for a long time after a rain shower, causing grief for allergy and asthma sufferers.

U-I chemistry professor Betsy Stone is the study’s author who led a team into the rainy outdoors of Iowa City on 28 separate days early last year. Rain events ranged from light showers to thunderstorms and even severe weather that spun off a tornado — and all brought down pollen.

“We logged many different rain events in the spring of 2019 and we found that they stuck around two-and-a-half to 11 hours after the rain ended,” Stone says. The research found the harder the rainfall, the longer the pollen fragments would remain suspended in the air. She notes there’s a difference between pollen and pollen fragments, as the smaller granules can make their way deep into the lungs and worsen a person’s allergic reactions.

“Pollens are relatively large atmospheric particles. They’re 20 to 100 micrometers in size. With that size, they have a little bit more weight and that causes them to settle out of the atmosphere due to gravity,” Stone says. “Pollen fragments are about 100 times smaller than an intact pollen and they can actually stay in the atmosphere much longer.”

A weather phenomenon that’s sometimes seen during thunderstorms can send pollen far up into the sky. “An updraft will take particles from near the surface up into the upper atmosphere where they’re going to be exposed to higher humidity,” Stone says. “Under those very humid conditions, a pollen grain can rupture, releasing hundreds of tiny particle fragments and those fragments can come back down to the earth’s surface when it rains.”

People who suffer from allergies or asthma should take note, she says, and do their best to stay indoors when the raindrops are falling — and immediately afterward. “The highest concentrations of pollen fragments, and the highest potential for human exposure, would be when it’s raining, especially when it’s raining very, very hard,” Stone says. “So, if people are able to avoid the very strong rainfall and the period of time right after the storm, usually an hour or two, the pollen fragment levels drop down considerably.”

The study was funded by the U.S. National Science Foundation and was published online in the journal Environmental Science & Technology Letters.