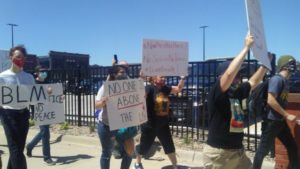 Protesters clashed with police in downtown Des Moines Friday evening, vandalized businesses and damaged the doors to the federal courthouse.

The evening began with a peaceful gathering of nearly a thousand people outside the Des Moines Police Department, an event organized in response to a black Minnesota man’s death while in police custody.

As most of the crowd left, authorities say a group of people jumped on a police cruiser, bashed out the car windows and police then formed a line on the street. There was a more than hour-long stand-off with a few hundred people who chanted and yelled George Floyd’s name. Some cursed and threw rocks and water bottles at police.

After community leaders were unable to resolve the impasse, the crowd booed a black police officer using a bullhorn to encourage the group to leave. Officers eventually fired tear gas and blasted a recorded command for the crowd to disperse. By midnight, at least 10 protesters had been arrested.

On Friday afternoon in Sioux City, about 100 people marched to the city’s police station. The group was vocal, but peaceful. Michael O’Connor, a local Native American activist, was one of the marchers.

“For me personally, as a Native American man, I know from first-hand perspective and experience that all the ingredients that created a situation up there in Minneapolis, all those ingredients exist right here in our community,” he said.

O’Connor said it’s time for everyone in the community to ask a lot of questions and come up with answers. A few Sioux City police officers rode bikes along the protest route, mainly to control traffic. Sioux City Police Sergeant Jeremy McClure said once the group reached police headquarters, officers kept a low profile.

“We didn’t come out and make a statement to the crowd because we felt it was important for us to just listen at this time,” he said. “People are angry and upset and they want to be heard and so we thought it was important that we just step back and let them say what they need to say.”

Several other marches and protests are planned around the state this weekend in response to George Floyd’s death. The white policeman seen in a bystander’s video kneeling on Floyd’s neck for several minutes, while Floyd was handcuffed, was arrested Friday and charged with third-degree murder and manslaughter.