You are here: Home / Crime / Courts / Investigation continues after 2 bodies found in buried car near Evansdale 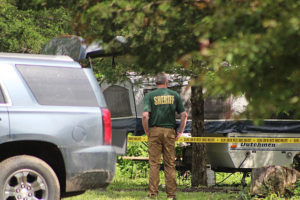 Investigators found two bodies in a buried car near Evansdale.

Investigators discovered two bodies inside a car that was buried near Waterloo and it is believed the human remains and vehicle are tied to a missing person case in central Arizona.

Investigators have tentatively identified the bodies as those of Elissa Landry and her step-father David “Nick” Batten of Chino Valley, Arizona, pending medical examiner results.

The bodies and vehicle were unearthed Friday after the FBI and local authorities spent three days last week digging up an undeveloped property at the end of a dead-end road in a wooded Evansdale neighborhood as part of an investigation into Landry’s and Batten’s April 19th disappearance.

No charges have been filed in the case, but Landry’s boyfriend, 24-year-old Mitchell Mincks, formerly of Waterloo, has been detained. Over the weekend, authorities arrested 42-year-old Allan “Tommy” Tucker of Waterloo on a pair of warrants, charging him with two counts of abuse of a corpse for his alleged involved in the case.