You are here: Home / Agriculture / Planting progress a positive among many issues facing farmers 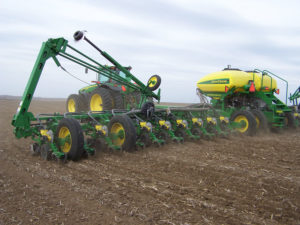 The coronavirus pandemic has hit farmers hard this spring — but Iowa Ag Secretary Mike Naig says the one thing it hasn’t hurt is getting the new crops planted.

“The crop side of things has truly been a bright spot for Iowa agriculture this year — especially after the last couple of years after very challenging springs — wet springs, flooding,” Naig says. The U.S.D.A. crop report shows less than ten percent of corn and beans remained to be planted heading into last week. Naig says the weather conditions played out perfectly.

“This year we had a really nice window open up at the end of April. Mother Nature cooperated just perfectly and we saw a record pace of getting corn and soybeans in the ground,” Naig says. “And it has just been a testament to all that it took to get that to happen in a very short time frame.”

Naig says the turnaround has been a welcome boost. “I had to say last year all throughout the year we were several weeks behind average. This year we can say things like ‘we’re a month ahead of last year and several weeks ahead of the five-year average.’ So,
really a bright spot for our farmers,” according to Naig.

There have been a few weather issues since the planting got underway — but nothing major. “We’ve seen some abnormally dry conditions across really from southwest Iowa up into north-central Iowa. Now, over the last ten days to two weeks we’ve seen an ample amount of rain that has come through and the crops look good,” Naig says. “We do need some heat –we do need some sun — and that will really allow things to take off.”

There were a few days where cold temperatures and frost hit after crops were starting to emerge, and that caused a little damage.
“Not widespread damage to the crops, but we do know that there was some damage to the crops and some replant that occurred. But by and large — that occurred when the crop was well-protected,” Naig says.

Last week’s crop report showed 97% of the corn had been planted and 92% of the beans. A new report released later today will update the planting progress.