You are here: Home / News / Casinos see people lined up to get in as they open back up 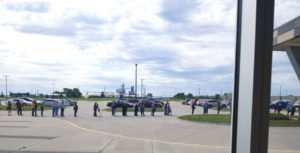 The Wild Rose Casino in Jefferson had around 140 people waiting when it reopened Monday.

Some of the 19 state-licensed casinos started re-opening Monday under new guidelines from the governor.

Timmons says it felt like the grand opening all over again and that was expected. “You bring something back — especially after we’ve been closed for 75 days — and yeah I don’t necessarily think next Monday or every Monday after this there is going to be people waiting to get in,” Timmons says. “I think the first day and maybe even the second day (after the reopening) there will be some, and then maybe a little more of the normal nature.”

The casinos are allowed to open at 50% of capacity. He says capacity is determined by the number of gaming positions normally available. “For instance, Jefferson had at total of 600 gaming positions — and that is figuring out what you had in table games and all the slot machines… and so we are limited to 300 patrons — that’s the capacity in Jefferson right now,” according to Timmons.

He says everyone seems to be very understanding of the new rules. Timmons says they are checking customers as they come in the door and it is up to them if they want to wear a mask. Employees are checked every day and are required to wear a mask and gloves. “And when someone gets up from playing a machine, we go over and clean it when they are done.”

Timmons has been in the industry for some 30 years and even with all the planning they’ve done, this is still new. “I’ve got lots of concerns — but I don’t know how to prioritize them — because I’ve never had to do this before,” he says. Timmons says no one expected to have to shut down and reopen again.

Timmons isn’t sure how the attendance will be moving ahead as the calendar is upset with everything else. “Normally our busiest month of the year is March when we are coming off the winter. Kind of the same thing you might say when people have been cooped up a little bit more than they would like to be. That happens in Iowa,” Timmons says. “Ironically, June is typically one of our slower months — whether it be people just taking summer vacations, just getting out of school, other activities, other things.”

They’ve adjusted their hours to be open from 10 a.m. to 10 p.m. Sunday through Thursday and 10 a.m. to midnight on Friday and Saturday. There will be no table games for now and he says they will reevaluate as more guidelines become available.