Governor Kim Reynolds says Iowans are united in grief and anger over the death of a black man on a Minneapolis street and she’s promising to seek systemic change, including steps to address racial profiling.

“I want all Iowans to know that I hear you,” Reynolds said. “I hear your frustration and I am committed to listening and having a respectful dialogue about what we need to address the injustices that are felt by so many and that might mean having some very uncomfortable and eye-opening discussions.” 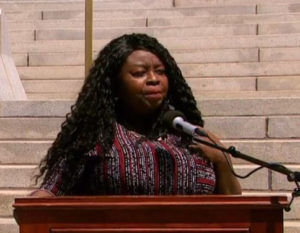 Iowa-Nebraska NAACP president Betty Andrews said this is a perfect time to peacefully protest — but the goal needs to be new policy.

“We need to address this legacy that started with America’s greatest sin: racism, slavery and all of its babies that have come since,” Andrews said.

The governor told reporters she’ll be working with Andrews and others to develop a final, anti-racial profiling plan to present to the 2021 legislature.

President Trump held a conference call with governors yesterday and told them they’re being too weak and need to dominate the protesters, or they’ll look like a bunch of jerks. Governor Reynolds said she was not on the call with Trump and was at the time talking with Iowa mayors, thanking them for facilitating peaceful protests and asking what they need from the state in the days ahead.

“I think you all know right now words matter,” Reynolds said. “We have to really be thoughtful about how we move forward and that’s where I’m working. That’s where I’m focusing my energy on.”

Governor Reynolds said peaceful protesters have a right to take a stand against injustice and she will not tolerate the “lawless rioters” who are trying to hijack that message.