You are here: Home / News / State Climatologist says May was cooler than normal 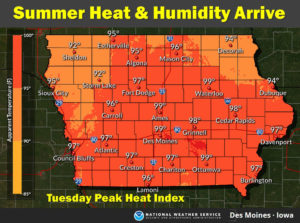 June has started out with some 90-degree days, which is much different than the just-ended month of May, which  wrapped up cooler than normal, according to state climatologist Justin Glisan.

“We’re looking at about four or four-and-a-half inches of rainfall across the state, which is about average,” Glisan says. “There are sections of the state in which we have drier-than-normal conditions. That’s where we saw some D-zero introduced by the U.S. Drought Monitor. D-zero is not drought. It’s abnormal dryness.”

Forecasting models are showing inconclusive predictions for Iowa’s weather during June, as some are indicating a warmer, drier month ahead while others show it’ll be cooler and wetter.

“Typically, when we’re in the summertime when we do see wetter-than-normal conditions, that’s tightly coupled with cooler-than-average conditions,” Glisan says. “There is an expectation that perhaps June could be warm and then we get to near-normal or slightly cooler conditions moving into July and August.” The first day of summer arrives June 20th.