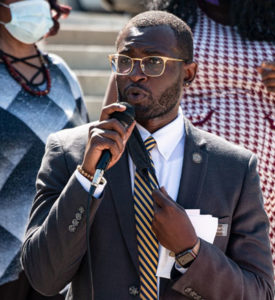 A group of Democrats in the Iowa legislature is urging the governor and Republican leaders to immediately pass three criminal justice reforms, starting by banning law enforcement from using choke holds.

Representative Ras Smith of Waterloo said the state attorney general and county attorneys should be given clear authority to investigate cases of police misconduct.

“No one law will end racism or end inequities that we face,” Smith said during a news conference. “This won’t happen overnight, but today we can begin to respond to the crisis, to bring justice for George Floyd and work for the day where no Iowan has to live in fear of becoming another hashtag.”

The third action the group seeks is a ban on hiring police officers with a history of serious misconduct.

The group of lawmakers invited Yena Balekyani, a young woman who’s been protesting in Des Moines, to speak at their news conference on the state capitol steps.

“I am holding you guys accountable,” she said. “I will be here and if this does not pass, I will be in the streets. We will be out here every single night until black lives matter.”

Democratic lawmakers say it’s clear they now “have the ear” of Republican Governor Kim Reynolds, who said earlier this week she’s working on legislation to address racial profiling, but Representative Smith and others say it’s time for action now, not six months from now.

The governor, during a news conference inside the capitol half an hour later, these and other racial justice proposals are worth developing into legislation.

“But you can’t fix it overnight,” Reynolds said, “and we are making progress.”

Black Lives Matter protesters in Des Moines are planning a march to the state Capitol tonight.