You are here: Home / News / DNR trying to track sandhill cranes as the population grows in Iowa 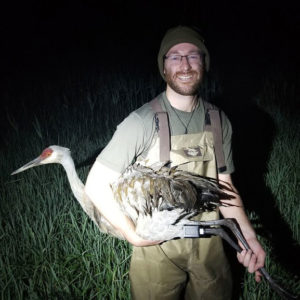 Matt Garrick with a sandhill crane.

The Iowa Department of Natural Resources is trying to learn more about sandhill cranes as they make a comeback in the state.

Research specialist Matt Garrick says the cranes disappeared from Iowa in the late 19th Century as the shallow prairie pothole wetlands were drained and they were overhunted. There are nine populations of sandhill cranes in North America,  three don’t migrant and six do.

“The big population that most everyone knows about is the mid-continent population,” according to Garrick. “That’s the one that migrants through Nebraska, and they get over a half a million cranes in there during spring.” They are trying to put transmitters on some of the Iowa cranes to find out exactly where they come from.

“We think the cranes here are likely mostly eastern population cranes that end up migrating and wintering in the southeastern U.S. It is possible we could have midcontinent cranes here — that is something we’ll learn from these transmitters,” Garrick says. He says nesting sandhill cranes were first documented in Iowa again in 1992. “We don’t know how many cranes are currently breeding in Iowa.” he says, “as of 2016 there was confirmed nesting in 29 counties in Iowa. Primarily kind of the northeastern corner — but there are a few counties throughout the rest of the state as well.”

Garrick says Iowa State University is helping with the project to track the sandhill. “We are hoping to put transmitters on ten cranes and the transmitters should transmit data for quite a few years.” He says the battery has a solar charger on it and will keep transmitting until the battery wears out.

The hardest part so far has been catching the long-legged birds to attach a transmitter. That is done at night. “Walk up to them with a spotlight on them and then put a dip net over them. But, what we are seeing is that it doesn’t work most of the time. It has worked once so far here in Iowa,” Garrick says with a laugh.

That crane was caught in Story County on May 24th. Sandhill cranes can live up to 35 years in the wild. They generally have two eggs — and fewer than 30% survive to take flight. Garrick says you are encouraged to report any sandhill crane nesting sites to the DNR.