You are here: Home / News / Governor to Senate GOP: time to act on felon voting rights 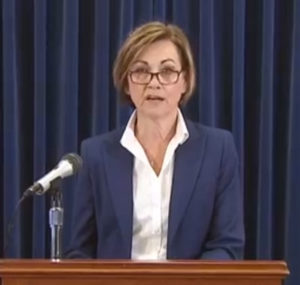 Governor Kim Reynolds says it’s time for Senate Republicans to lay the groundwork for a constitutional change, so released felons automatically have the right to vote.

“Iowa is now the only state in the nation where all convicted felons lose their right to vote unless they apply to the governor,” Reynolds said. “Now is the time for action to change that.”

In 2019, Reynolds proposed a constitutional amendment as part of her “second chances” agenda, to automatically restore felon voting rights. The process of putting proposed constitutional amendments on the ballot is a lengthy one in Iowa. If senators fail to act this year, the earliest the issue could be presented to voters would be 2024. Last night, House Republicans sent the governor a related bill, to take effect if the amendment passes, to require a felon to have paid all victim restitution before they’d get the right to vote. Critics called that a poll tax. Reynolds plans to sign the bill into law.

“This bill ensures the rights of victims are protected by clarifying that victim restitution must be repaid before an Iowan’s voting rights are restored,” Reynolds said. “We must never forget about victims and that’s why I think this bill is a sensible compromise.”

Protesters have been calling on the governor to issue an executive order automatically restoring felon voting rights. Reynolds has said she’s seeking a permanent change, so the policy doesn’t change depending on who’s elected governor.