You are here: Home / News / Storms bring rude wake up across Iowa 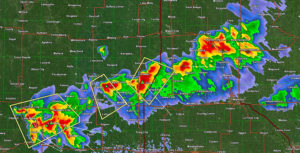 Thousands of Iowa homes lost power early this morning as a strong band of storms swept across the state, packing near-hurricane-strength winds that toppled tree limbs and utility poles.

Meteorologist Brad Small, at the National Weather Service in metro Des Moines, says there were no reports of injuries but many Iowa communities have messes to clean up. “Thunderstorms moved into northwest Iowa during the early morning hours and they intensified around the Jefferson area where we had some tree damage,” Small says. “That continued through Dallas County and through the (Des Moines) metro area. We had additional reports of a lot of tree damage, 60 and even as high as 70 mile-per-hour wind reports.”

There are scattered reports of tree damage in multiple counties. Small says it was all from straight-line winds, no tornadoes. Many parts of Iowa have been experiencing saturated soil in recent weeks where even moderate rainfalls have led to flash flooding, but he says the showers early today weren’t as drenching as others.”The storms were fairly fast-moving and there were some bursts of heavier rain,” Small says. “It looks like some spots had a half-inch to an inch, but there are no real concerns with flooding at the moment.”

The forecast indicates the outside possibility of more rough weather this afternoon, but the rest of the weekend should be relatively calm. “The warm and fairly humid air will be in place through the weekend and there could be a lingering chance for showers and storms south later today and during the overnight hours into Saturday morning,” Small says. “After that, it looks like much of the weekend will be dry until we start ramping things up again next week, starting around Tuesday.”

Keep up with the latest forecast at weather.gov.