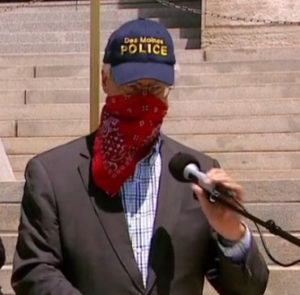 City and county leaders in Iowa are working to address some issues being raised by protesters who demand racial justice.

Linn County Supervisor Stacey Walker is calling on police officers across the state to not use tear gas against peaceful protesters. At a Black Lives Matter rally in Cedar Rapids on Saturday, Walker said Iowans who are expected to remain peaceful should be free from harm as they exercise their rights.

Walker says, “I’ll be sending a formal letter this week to all police chiefs in the state of Iowa making this request that they ban the use of chemical agents against peaceful protesters.” Tear gas causes skin irritation, tearing up, coughing and difficulty breathing, and in severe cases can cause respiratory failure. The effects can be especially dangerous amid the COVID-19 crisis, as the coronavirus is spread by respiratory droplets.

Some in Cedar Rapids are calling for other reforms — a citizens’ review board of police and a ban on the use of chokeholds, among other things. Rally organizer Leslie Neely laid out some of the demands at the event. “We are demanding decriminalizing minor marijuana crimes and other low level offenses,” Neely said, to cheers from the crowd. “Our current drug laws and policing practice, disproportionately impact communities of color.”

Organizers also urged protesters to continue taking action through November, by holding elected officials accountable up and down the ballot. The Des Moines City Council will consider a proposal today that would ban racial profiling by city police. Passing the ordinance was one of the demands made by Black Lives Matter organizers who led a march to Mayor Frank Cownie’s home last week. After the protest, Cownie told reporters he expects the ordinance to pass.

“We know this isn’t the end, but we have to have a place to start, and let’s say, all right, we’re gonna do it,” Cownie says. “So, we’re gonna put that ordinance on the table on Monday.” Some community activists want the council to add onto the current proposal. They’re calling for mandatory data collection and a ban on pretextual stops where a minor violation is used to look for something more serious like drug possession. The council meeting will take place remotely because city buildings are still closed due to the coronavirus.

During Saturday’s march in Des Moines which reached the state capitol steps, Lori Young of Iowa Citizens for Community Improvement called on Des Moines leaders to pass a ban on racial profiling by police officers.
“We want a strong racial profiling ban that has some teeth to it,” Young says. “Don’t come to us with no mess, no watered-down ordinance.” The city’s Human Rights Commission first shared a draft of the ordinance with the Des Moines City Council more than a year and a half ago. Saturday’s demonstration marked the ninth straight day of marches in Des Moines.