You are here: Home / News / Rare remains of tropical storm to bring heavy rain to Iowa 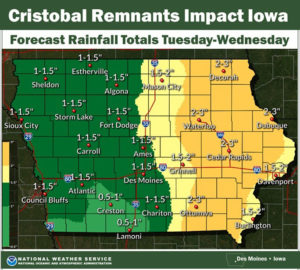 Meteorologist Brooke Hagenhoff, at the National Weather Service, says those big named storms over the Gulf of Mexico usually break up before they reach Iowa, but this one should remain a post-tropical depression, which is very uncommon.

“That has really only happened once since records have been kept and that was in 1900, a Galveston (Texas) hurricane,” Hagenhoff says, “so, very rare.” The storm’s arrival will mean the end of the hot and humid weather in Iowa, funneling in much cooler temperatures and the potential for multiple heavy downpours between Tuesday morning and evening.

“We are looking at rainfall totals of between two to three inches that go across portions of southeast and eastern Iowa,” Hagenhoff says. “That’s really where the main axis is going to be for the heavier precipitation.” The storm may bring western and central Iowa just an inch to an inch-and-a-half of rain, but then another system will arrive from the west late Tuesday into Wednesday morning, which could bring another inch or two of rain.

“Thankfully, the rain with that secondary system coming out of the west is going to bring the heavier rainfall across western and central Iowa,” Hagenhoff says. “So, the axis for the heavy rainfall from the tropical system and the secondary one are not going to overlap.” Iowa’s eastern third is already under a Flash Flood Watch.

Keep up with the changing forecast at weather.gov