You are here: Home / News / IWD director in Washington for hearing on restarting the economy 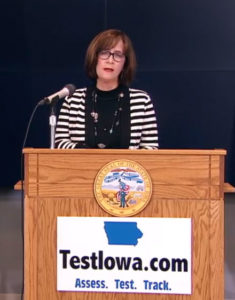 The head of Iowa Workforce Development is scheduled to testify before a U.S. Senate panel this afternoon about critical troubles that are hurting efforts to jumpstart the state and national economies.

Iowa Senator Chuck Grassley is chairing the Finance Committee hearing that will feature IWD director Beth Townsend, who Grassley says will lay out the complications she’s seeing in Iowa’s workforce.

Grassley says, “We’re going to focus on the problem that developed as a result of a problem we knew we were creating two months ago when we set up $600 additional unemployment insurance above whatever the 50 states would pay in their respective states.”

Thanks to the CARES Act, a person who brought home a weekly paycheck for $1,000 prior to the pandemic may now be getting $1,600 a week on unemployment, which creates a dilemma. “We knew at the time we were going to have some people getting more money on unemployment than they might get from their job,” Grassley says. “Consequently, we’re finding a lot of small businesses, maybe even big businesses, are having trouble calling people back to work.”

Grassley says there are ideas circulating about how to remedy this problem, but no solutions are nailed down as yet. “We’ve disincentivized people to go back to their jobs,” Grassley says, “and it’s a tremendous economic problem because if we want to open this economy up, you’ve got to have workers.”

One possibility being considered is using federal dollars to supplement the salary of individuals who’ve been laid off and collecting unemployment benefits, prodding them to return to work.

The Washington, D.C. hearing is scheduled for 1:30 P.M./Central.