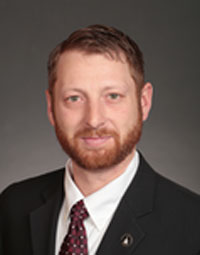 The legislature has passed another bill that toughens penalties for those who trespass at a “food operation,” including livestock confinements and meat packing plants.

“It’s a pretty simple concept,” Representative Jarad Klein, a Republican from Keota said. “It doesn’t mean you can’t go up and knock on somebody’s door that’s a farmer. You just can’t go in their livestock building, for example, without permission.”

Republican Senator Ken Rozenboom of Oskaloosa said he was targeted by animal rights protesters who got inside a hog confinement he had leased to someone else and released photos and video the group said showed animal neglect.

“The M.O. here is simply lies, deception and intimidation. That’s what they do,” Rosenboom said. “In my case, intimidation to the point of a number of death threats. That’s who we’re dealing with.”

The bill enhances the penalty for trespassing on farms and “food operations” to an aggravated misdemeanor. A second offense would be a class D felony. Senator Liz Mathis, a Democrat from Cedar Rapids, said what happened to Rozenboom is wrong.

“People are often on our farms without being invited and it needs to stop,” Zumbach said, “and this is the effort to do that.”

Critics predict the bill — if the governor signs it into law — will be successfully challenged in court. The bill passed the House and Senate Friday. The enhanced penalties for trespassing in the bill would apply to plants where eggs, milk and fish are processed as well as meat packing plants.