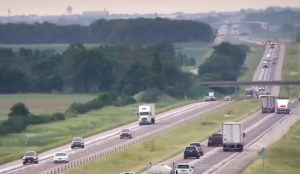 DOT traffic camera view on I-35 south of Ames.

Traffic and the sale of new cars are both picking back up as the state emerges from the shut down brought on by the coronavirus.

Anderson says traffic volume has increased every week since the low. “We are still below the 2019 levels — but the week that ended last Thursday — total traffic was down 21 percent,” according to Anderson. So, we’ve cut in half the traffic impacts on the state.”

The fees paid when someone buys a new car also saw a drop. “In March they were down a little over 50 percent from April of last year…..in May it’s down a third from what it was,” Anderson says. The car fees and gas tax are used to fund road repairs.

Anderson says they had projected a loss of 25% in road funding, or about $35 million. But those numbers are looking better.
He says COVID-19 impact now for the June distribution is a drop of  $25 million — which is a 20% reduction compared to the previously predicted 25%.

Anderson says there is a lot of variability and projections “are highly subject to change.”