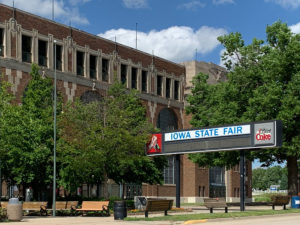 The Grand Concourse of the Iowa State Fair.

The 2020 Iowa State Fair has been canceled, due to the pandemic. The Fair Board met this afternoon and voted 11-2 to make the decision. It’s only the sixth time in the fair’s history that the annual summertime event has been canceled.

“We hope to preserve the grand tradition of the Iowa State Fair, it’s just going to take ’til next year to do that,” Iowa State Fair general manager Gary Slater told reporters minutes after the decision was announced.

Slater told reporters he sympathizes with people who’re upset with the decision, because he’s upset, too. 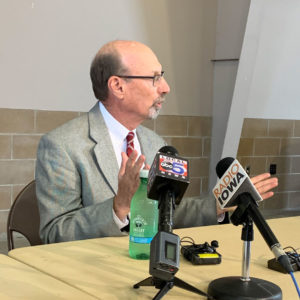 Slater and his staff tried to devise a plan to have fewer vendors, fewer attractions, and limited attendance to address public health concerns about spreading COVID-19 among crowds

“It became a challenge to have a fair that we could all enjoy and be proud of,” Slater said, “and, at the same time, our surveys indicated that our attendance would be greatly reduced.”

Fair officials conducted a general survey in May and then in June surveyed the general public as well as people who’d shown an interest in fair activities by signing up for email notices. Slater said in the end the decision was clear.

“Let’s not damage our brand by offering something that’s less than our standards because we have to get people in the door,” Slater said.

Slater and his staff estimated a scaled-back, socially-distanced fair would have lost about as much money as they’ll lose by not having a fair at all. The decision about having a 2020 fair had to be made by mid-June, according to Slater, because they have to hire hundreds of temporary workers to put on the 11-day-long event.

“Normally, we have 1500 people on staff, in order to order our cleaning supplies and prepare the livestock barns and everything,” Slater said, “it has to start pretty much today.”

The Fair Board directed Slater to work up a plan for a potential event the state fairgrounds in August, for 4-H and FFA members to show their livestock. Slater says he and his staff will meet over the next couple of days to evaluate the financial implications and the health precautions they’d have to take.

“Those same animals that would have come to the fair and that we would put together some sort of a schedule that we would those shows to be stretched apart, one day at a time with one show, versus the way we do it now,” Slater said. “You know, there’s all barns going every day.”

Slater has been the fair’s manager since 2001 and he’s made contingency plans for all sorts of events, like fires, storms and brutally high temperatures during the fair.

“But not once did anyone prior to probably the end of February think about a pandemic worldwide that would bring us all to our knees,” Slater said.

Earlier today, Governor Kim Reynolds said she would support whatever decision the Fair Board made. The cancellation of the Minnesota and Wisconsin State Fairs had no bearing on the Iowa State Fair’s cancellation, according to Slater.

“The decision was made totally based on our information developed either in staff, by surveys or by the medical professionals right here in Iowa,” Slater said.

This is the first time since World War II that the Iowa State Fair been cancelled. The 11-day event bills itself as the state’s largest tourist attraction and has been drawing more than a million visitors annually since 2002.

(This posted was updated at 6:01 pm with additional information)