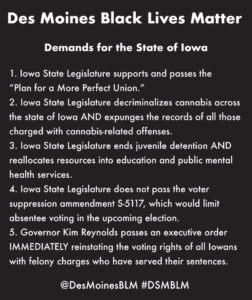 A group of about two dozen Black Lives Matter protesters entered the  Iowa Capitol this morning, urging legislators to take action on a variety of fronts.

A 16-year-old protester who said his name was Charles said his top priority is getting the governor to issue an executive order that automatically grants voting rights to felons when they’re released from prison.

“I have had a bunch of people that I look up to of course go to jail when they were younger and now they can’t vote on the things they really want to vote on,” he told a group of reporters.

The Black Lives Matter activists have been meeting individually with lawmakers today to discuss their priorities.

“I’ve never been inside the capitol before,” he said. “I think this was a really good opportunity to see what’s inside while fighting for our demands,” said the protester who gave his name as Charles.

The group is calling for an end to juvenile detention and for decriminalizing marijuana possession. The Des Moines Black Lives Matter group also tweeted that it opposes any move to limit absentee voting in future elections.