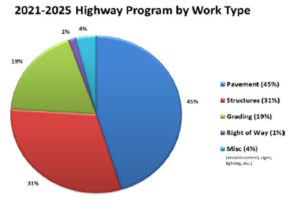 The Iowa Transportation Commission has approved the latest version of the five-year road improvement plan.

The pandemic has created some uncertainty about the state funding sources — but DOT planner Stuart Anderson says the commission adjusted. “The forecasts that commission used were all done pre-COVID-19, and in discussions with the commission, they decided to continue using those forecasts for the development of this program,” according to Anderson. This is a five-year program and hopefully, those impacts of COVID-19 don’t extend a real long period in that five-year program.”

He says they also added work to increase the resiliency of Iowa Highway 2 in southwest Iowa along the Missouri River to increase the elevation for the area that has seen a lot of flooding. Anderson says the amount of money spent on the road plan has stayed pretty stable. He says it was $3.5 billion last year and this year it is $3.6 billion. “The state funding is relatively flat. We of course has the fuel tax increase in 2015, which provided a big bump in funding.”

You can see the complete plan on the Iowa DOT’s website.