You are here: Home / Fires/Accidents/Disasters / One dead after car goes into Oskaloosa pond 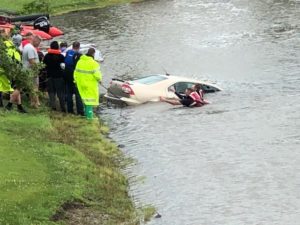 One person was found dead in this car pulled from an Oskaloosa pond.

(Update 6/11/2020) Police have identified the person pulled from the car as 81-year-old Marilyn Mueller of Oskaloosa.

One person was found dead inside a car pulled out of a pond today in Oskaloosa.

Police were called to Edmundson Park shortly before 11 a.m. about a car that had gone off the road and into a pond. When crews arrived, the car was still visible, but it went under the surface a short time later. Over an hour later, the car was recovered from the pond. One dead person and a dead dog were inside the car.

The victim’s name has not been released pending notification of relatives. The Iowa State Patrol is in charge of the investigation.