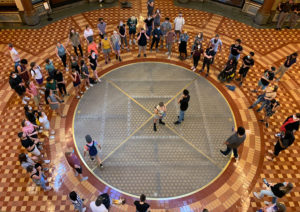 Black Lives Matter protesters are back inside the Iowa Capitol today, seeking a face-to-face meeting with Governor Kim Reynolds.

The group periodically has been chanting: “Where is Kim?” outside the door to the governor’s office, as State Troopers look on.

Last week, Governor Reynolds said she plans to meet with some of the young people who’ve been protesting in the capital city, but no time or place has been set. Ellie Odole of Des Moines, a University of Iowa student, has been participating in protests for days.

“I think now it’s more about what the elected officials do because they know that we’re out here and they know we’ll keep going until something gets done and a lot of them have said: ‘Oh, we’ll listen. We’ll listen,'” she said today during an online forum organized by Iowa Citizens for Community Improvement. “But even if they listen, that’s not the same as doing something.” 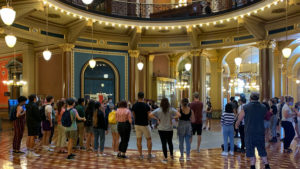 Linn County Supervisor Stacey Walker, another participant in the forum, said it’s not only time to rethink how public safety programs are structured, but it’s time to support people of color seeking leadership roles in business and elected office.

“It all boils down to power: who has it, who doesn’t and what those who have it actually do with it,” he said. “And until more people of color, their advocates and allies are empowered and find the courage to do the right thing and act with conviction in these times of great challenge, our situations here will never change.”

Walker, a Cedar Rapids native, is the first African American elected to the Linn County Board of Supervisors. He was first elected to the board during a special election in 2016. Walker has sent Iowa police chiefs a letter, urging them to refrain from the use of chemical irritants like tear gas on peaceful protesters.