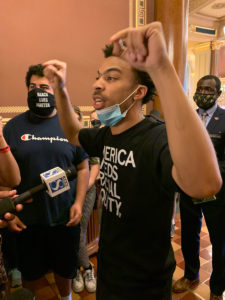 A group of Black Lives Matter protesters met with Governor Kim Reynolds late this morning to discuss their priority issue of the day.

The group is pushing the governor to immediately issue an executive order that would automatically restore felon voting rights. A proposal still awaiting debate in the Iowa Senate seeks to eventually amend the state’s constitution, so felons may vote once they’ve completed their sentences.

A woman who gave her name as Jalesha was among the group who met with Reynolds and she spoke with reporters immediately afterward.

“All of these officials are telling us we need to go about change the right way. We need to be a part of the official process. We need to talk to our legislators — all of that political correct jazz and so that’s what we’ve been doing,” she said. “We’ve been showing up here every day, we’ve had our meeting with the governor and now we need her to do her part.”

The protesters are lobbying legislators today and will meet again with the governor on Monday.

“I am hesitantly encouraged,” Jalesha said. “I don’t necessarily believe in government officials, but I believe in all the folks who show up every day and I believe in the pressure that we can put on them.”

Matthew Bruce, one of the leaders of the Des Moines Black Lives Matter group, said they will “spend the rest of the day pretty much pressuring all the legislators of both parties to support Kim Reynolds and support the executive order.”

Amending Iowa’s constitution is a lengthy process and 2022 is the earliest Iowans could vote to automatically restore felon voting rights. Bruce said having the governor make that state policy today, through an executive order, would build momentum for passage of that constitutional amendment. The Black Lives Matter protesters can easily throughout the state capitol as they occasionally gather to chant or sing.

“It sounds like joy,” Bruce told reporters. “I can’t even explain that catharsis that’s kind of coming out right now.”

It’s possible the 2020 Iowa Legislature will complete its work and adjourn for the year sometime this weekend. The House and Senate are back in session today and may meet Saturday as well. Lawmakers who are not seeking re-election in November have begun delivering farewell speeches.