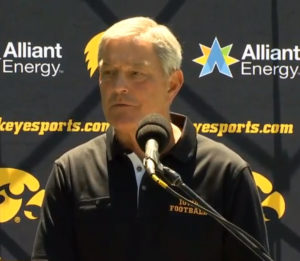 Iowa football coach Kirk Ferentz says the team has made progress in dealing with issues surrounding the claims of racial disparity in the program.

The team has been able to speak face-to-face for the first time in the past week as they returned to campus. Ferentz says they had some raw and emotional discussions. Ferentz says they are moving forward to make changes — such as lifting the player ban on Instagram and twitter.

“It was a stupid policy from that standpoint, but it was designed intent to help protect our players. That is a parental instinct, coaches instinct. You want to protect your players, but certain things just tell you, they show you that you embody players to have more freedom, more movement, more expression,” Ferentz says. Ferentz says while the conversations have gone well — they need to continue working. “The bottom line what are we going to do to move forward. That is our commitment. My commitment has always been what is best for our program, what is best for our players. We want to do it in a respectful and honorable way to all of our former players, ” he says. 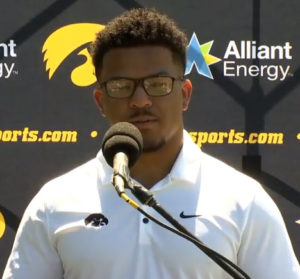 Running back Ivory Kelly-Martin says black players did feel like they had to walk on eggshells in the football building.
“It was an atmosphere where you did have to look out, kind of watch your back, you always had to kind of be on your toes at times. Throughout this week there have been so many conversations. There have been so many talking about change — and we are all hopeful that this is actually going to happen,” he says.

Kelly-Martin says the atmosphere has changed in just the short time they have been able to get together and talk through the issues. “We are all excited about what we have to come. We are all to really build relationships — not
I am really hopeful that we will be able to create something big.

Defensive back Kaevon Merriweather had posted a statement about fans needing to support the team in whatever they decided to do — including if they were to kneel for the National Anthem. He got a lot of feedback and says he expected that. 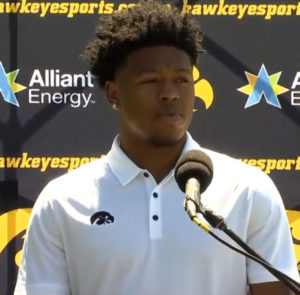 Ferentz says kneeling for the anthem is something the team will eventually address. “It’s not timely right now — but it’s got to be a topic we discuss,” according to Ferentz. “I think we all realize it’s a very polarizing issue right now. And I am very confident that there are ways to do things, ways to recognize individuals, movements, whatever it may be, causes, in a way that hopefully is not polarizing — but yet powerful — that would be my goal.”

Ferentz says he cannot address the suspension of strength coach Chris Doyle at this time because the review process is still underway.