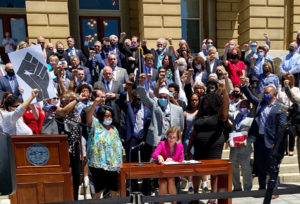 A rare scene on the Iowa Capitol steps this afternoon. Surrounded by nearly every state legislator and a few dozen Black Lives Matter protesters, Iowa’s governor signed a police reform bill into law.

“To the thousands of Iowans who have taken to the streets calling for reforms to address inequities faced by people of color in our state, I want you to know that this is not the end of our work,” Republican Governor Kim Reynolds said. “It is just the beginning.”

Reynolds praised key lawmakers from both political parties whose collaboration led to speedy and unanimous approval of the bill last night. It prevents police with a record of serious misconduct from being hired by an Iowa law enforcement agency and bars police from using choke holds. Governor Reynolds began her remarks by saying George Floyd’s death in police custody “opened the eyes of a nation” and had sparked a movement.

“It also reinforced the message of our African American brothers and sisters that injustice exists and is unacceptable in a free and great nation such as this,” Reynolds said.

Reynolds called the bill “historic,” but just the first step to systemic change.

“It’s simply gut-wrenching to hear the feelings of fear that so many people experience on a day-to-day basis and the persistent sense they have that justice is not applied fairly or equally,” Reynolds said. “And it’s also frustrating to see the noble service of the vast majority of Iowa’s law enforcement officers tarnished by the horrific acts of a few.”

As Reynolds signed the bill, protesters chanted “black lives matter” and one of them held up a black power poster. After the ceremony concluded, the protesters danced on the steps of the statehouse to one of gospel singer Kirk Franklin’s biggest hits, titled “Revolution.”