You are here: Home / Outdoors / Bear caught on video in eastern Iowa field 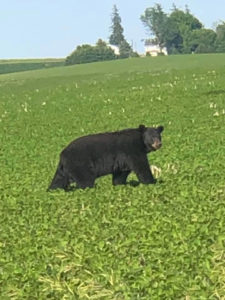 The bear in an eastern Iowa field. (Nan Holst photo)

A large black bear has been spotted lumbering through fields in eastern Iowa.

Multiple still and video posts on Facebook show the big adult bear ambling through a green cover crop near the Clinton County town of Welton on Sunday. At least a dozen people are also seen along the fencerows, hopping out of their pickups to gawk and shoot their own photos.

Late last week, what appears to be the same bear was seen to the north in Jackson County near Maquoketa and Preston. Iowa does not have a breeding population of black bears, but Wisconsin, Minnesota, and Missouri do.

Iowa DNR officials say if you spot a bear, keep your distance and don’t approach it, as it’s likely just passing through.