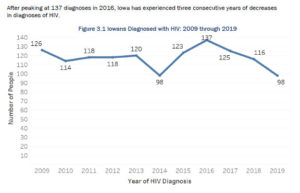 The Iowa Department of Public Health says its 2019 HIV Surveillance Report finds a 30 percent reduction in diagnoses over the last three years.

Randy Mayer is chief of the Bureau of HIV, STD and Hepatitis for the Iowa Department of Public Health and says this is the first sustained reduction in HIV diagnoses since reporting began in 1998.

“We are first or second in the nation with as a state with our rate of viral suppression among people living with HIV,” Mayer says. “That’s about 80 percent of people diagnosed with HIV who have reached viral suppression — so they can’t transmit to other people And we believe that’s what’s reducing the transmissions and diagnoses.”

He says they’ve done a lot to help people get the medication for treatment. “We’ve always focused on trying to get people tested earlier and into care. But, over the last three years, we’ve actually gotten quite a bit of funding to support people who are already diagnosed. To help them stay in care, to help them take their medications on a regular basis to make sure that they reach the viral suppression.” Mayer says.

Mayer says advances in the drugs have helped. “The treatments have progressed a lot so that they are easier to take, they have fewer side effects. You can take just one pill, one time a day and it has all the medications that you need,” according to Mayer. “So they often have combined two or three medications into one pill.”

The populations most impacted by HIV also saw the largest decreases in diagnoses over the last three years. This includes males (32% reduction), white Iowans (35% reduction), black/African American Iowans (33% reduction), and men who have sex with men (43% reduction).

“Not all populations are doing equally well, and so we really trying to redouble our efforts to reach African Americans and other blacks, Latinos, people who inject or use drugs. And really, young people ages 13 to 24. Those are the people who find they have the most barriers to taking medications on a regular basis and staying in care,” Mayer says.

Mayer says Iowa has a low number of people infected with HIV compared to other states — with about one case in every 1,000 residents.