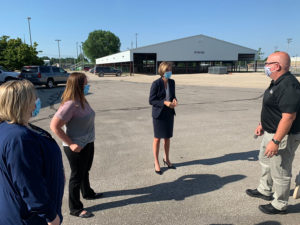 Governor Kim Reynolds at the Test Iowa site in Osage.

“We’re working on that right now, sitting down with various groups, listening to what they think is important what is contained in that executive order,” Reynolds said today in Osage, “and then I’ve got my legal team working on it.”

Iowa is now the only state that permanent bars paroled felons from voting unless the governor approves their voting rights application. Reynolds has met twice with the Black Lives Matter protesters to discuss using her executive authority to grant felon voting rights and she said things were “a little bumpy” at the beginning.

“We’ve got people who are new to the process and I don’t mean this in a bad way, but just not familiar with who can do what, how it is implemented, how important it is to get it done right,” Reynolds said.

“Just some things we might be able to address because we know more now,” Reynolds said, “and so just looking at holistically what that looks like.”

When Terry Branstad became governor again in 2010, he re-instated the policy that requires released felons to apply to the governor for their voting rights. In 2019, Reynolds called on legislators to pass a resolution outlining an amendment that would let Iowa voters decide whether to change the state’s constitution and automatically grant released felons their voting rights. Reynolds confirmed she recently told legislators she’ll use her authority to issue an executive order on the topic.

“We have an important election coming up,” Reynolds said. “…We’re working on the language to see what that looks like, but hopefully it would mirror what we would put in a constitutional amendment so that we could be consistent in what we’re trying to do.”

That means Reynolds is likely redrafting the proposed constitutional amendment to include some of the limitations GOP lawmakers sought, like repayment of all victim restitution before a felon may vote.

“I still am not going to give up on a permanent solution,” Reynolds said. “I just believe that’s the right thing to do and then it doesn’t matter who’s sitting in the governor’s chair.”

Reynolds made her comments in Osage after marking the opening of a “Test Iowa” site at a local clinic.