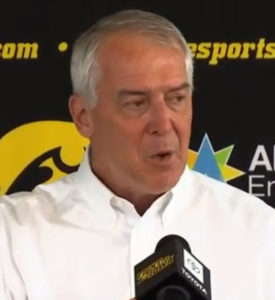 The University of Iowa announced it has reached an agreement that will see Head Strength and Conditioning Coach Chris Doyle leave the school. Doyle has been accused of making degrading comments to black players on the football team.

Athletic Director Gary Barta talked with the media Monday and says he came to the decision that Doyle should leave the team after emotional meetings with players to discuss the allegations of racial disparities within the football program. “As I was thinking through and trying to come up with the next steps — I did come to the conclusion that one of those steps — a separation with coach Doyle — was the thoughtful and sensible thing to do,” Barta says.

Barta says he then discussed it with head coach Kirk Ferentz. “Kirk and I talked and we were both in full agreement that that was the case… I ended up speaking with Chris first and we moved through that process. I can tell you that this was not a decision that I made lightly. It is just one piece of the plan that is going to be needed for us to move forward,” according to Barta.

Barta says some of the issues were already being addressed after a report on the entire athletic department found graduation rates among black athletes were lower than their white counterparts. “And while no teams ore individuals were singled out in the report — it was reported verbally that many of these comments were coming from football,” Barta says. “So as a department, including football, we began to put a plan in place to address these issues.”

He says part of the plan included hiring former football player Broderick Binns as the diversity coordinator. Barta got emotional and cried at a couple of points during the news conference when he talked about the impact of racism. He says they are taking other steps to improve. “I thought we were on a path of making things better and doing the right things. The things I’ve heard — in the last week-and-half especially — clearly they weren’t enough and weren’t happening fast enough,” Barta says.

He announced the university has hired a Kansas City law firm to conduct an independent review of issues and allegations relating to racial disparities within the football program.  “And from that review, we will receive a report, we will learn, we will determine any additional actions that need to be taken in response,” He says. “We will continue to listen. One of the things that I’ve known — this isn’t new — but we have to find better ways, and that is to make sure that people have a place to go.” Barta says coaches have been the first place athletes go to voice a complaint and he says they need to know they have another place where they can go if they have concerns that need to be addressed.

Ferentz’s son Brian is an assistant coach and some allegations have also been made against Brian. Barta says he will see what the review determines about all of the other staff members of the football team. He did say he is confident in Kirk Ferentz’s ability to continue leading the football program based on what he as seen in 15 years and the last few weeks.

“I know how this is impacting him. I know what he is trying to do to move forward. And I know the difficult conversations he is having and his willingness to change. And those are the things that I am basing it upon,” Barta says. Barta did not say when he expected the review to be completed.

The details of the agreement with Doyle will pay him around $1.1 million in two payments.