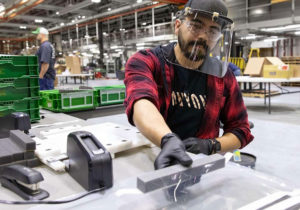 Health care workers at dozens of Veterans Affairs facilities nationwide are being provided with protective face shields made at a John Deere plant in the Quad Cities.

In April, the seeding factory in Moline, Illinois, switched from making farm equipment to PPE. Project leader David Ottavianelli says more than 400,000 shields were produced and a quarter of them were sent to those who care for veterans.
Ottavianelli says, “That led to us eventually delivering over a 135,000 shields to approximately 40 different VA facilities in about 26 states.”

Although production on the face shields has wrapped up, Ottavianelli says they can easily switch back if COVID-19 begins to surge again. “We’ve learned a lot in this conversion so we actually have the facilities that if needed could be converted back over to produce this plus we also understand those supplies chains so we’ll be able to get that material quickly,” he says.

Ottavianelli says the additional shields that were not distributed to V-A facilities have been sent to Homeland Security facilities in Iowa and Illinois to be part of their inventory.