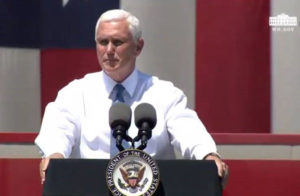 Vice President Mike Pence says America is making what he calls a “transition to greatness,” as the economy bounces back from pandemic shutdowns.

“After the difficult times through which we have passed as a nation, today every state in this country and nearly three-quarters of America’s small businesses have already begun to reopen,” Pence said early this afternoon in north central Iowa. “We’re opening up America again and you’re part of that story.”

Pence told a crowd in Forest City early this afternoon that all 50 states are reopening in a safe and responsible way.

“Here and across America, we slowed the spread, we flatted the curve, we saved lives and that’s why we’re opening up America again,” Pence said, to cheers. “You did it.”

Pence toured the Winnebago Industries facility in Forest City, then spoke to a large crowd seated in the sun outside.The vice president praised the company for its temporary shift to making face shields.

“It’s men and women like you and companies like this that are…getting America rolling again,” Pence said. “I mean it was companies in essential industries that literally never stopped…who transformed themselves to be a part of the solution for our health care workers and for our families.”

A group of Black Lives Matter protesters could be heard chanting nearby as Pence spoke. Pence mentioned the police reform plan President Trump signed this morning. 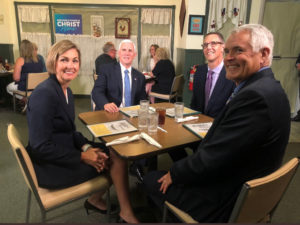 Photo tweeted by Governor Reynolds at lunch with the VP.

“She opened up today for the first time since the pandemic struck,” Pence said and the crowd at Winnebago Industries cheered.

Pence ate at a table with three other people: Governor Kim Reynolds, the governor’s husband  and state Senator Randy Feenstra. Feenstra is the Republican who defeated Congressman Steve King in this month’s G-O-P Primary.

Pence has visited Iowa 10 times since he was elected VP, including a visit six weeks ago to focus on issues in the nation’s food chain. His visit today comes a day after The Des Moines Register’s Iowa Poll showed President Trump just a point ahead of former Vice President Joe Biden. Trump won Iowa by nine points in 2016.