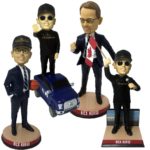 The National Bobblehead Hall of Fame and Museum has released four new bobbleheads featuring Iowa native and Toronto Raptors head coach Nick Nurse. The native of Carroll led the Raptors to their first NBA championship in 2019.

Nurse played collegiately at the University of Northern Iowa where played in 111 games for the Panthers and still ranks as the school’s all-time leader in 3-point percentage (.468). Nurse got his first full-time head coaching job at Grand View University in Des Moines when he was 23 years old. At the time, he was the youngest college basketball coach in the country. After two seasons, he took on an assistant coaching role at the University of South Dakota for two seasons.

When asked about the bobblehead series, Coach Nurse said, “I know Raptors fans are among the most passionate when it comes to the team and their bobblehead collections, and I’m excited to be teaming up with the National Bobblehead Hall of Fame and Museum to bring fans this bobblehead series to commemorate last year’s historic championship.”

“Nick Nurse’s head coaching debut with the Raptors will never be topped,” National Bobblehead Hall of Fame and Museum co-founder and CEO Phil Sklar said. “Beloved by Canada for bringing the country its first NBA championship, we are excited to release these four bobbleheads of the popular head coach.”

The bobbleheads are limited to 2,019 copies of each and will arrive later this summer and be shipped out by August.