You are here: Home / Fires/Accidents/Disasters / Parents encouraged to supervise kids as they get back outside 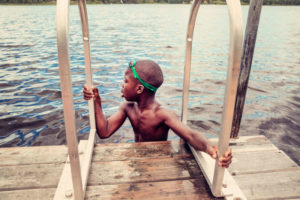 According to the CDC, the unintentional drowning rate for African Americans is significantly higher than that of whites across all ages.

With summer officially starting this weekend, experts at the University of Iowa say children are more likely to get hurt during the pandemic than in summers past.

Lisa Roth, deputy director of the U-I Injury Prevention Research Center, says being active in the outdoors is good for our physical and mental health but it has to be done safely. “We have a lot of distractions facing us with working at home, maybe financial worries that we’re having, there’s caretaking duties that we just aren’t used to with the kids around now, so maybe we’re paying a little bit less attention,” Roth says. “We’re encouraging families to really focus in on supervision as they’re engaging in their summer activities.”

With many Iowa communities keeping their swimming pools closed for the summer, some families are buying their own backyard oases. Roth says children have a greater risk of drowning during the pandemic at home with caregivers who may be distracted. She notes, drowning is the leading cause of death for children ages one to four, and it’s the second leading cause of death in children ages five to nine.

“You really have to be mindful of making sure you know the capabilities of your child,” Roth says. “Supervision is key. Also, we’re encouraging families to make sure there are lifejackets available and being used properly for the kids as they engage in those swimming activities.”

While cycling is a wonderful activity, nearly 400-thousand children are treated in emergency rooms nationwide every year for bicycle-related injuries. Roth says safety has to come first, especially this summer. “We want to make sure that your bike is in good working order, that you’re checking the air in the tires, the brakes, the chain before you set off on a ride,” Roth says. “Also, the kids have to know the rules of the road and it’s really important that families engage in that education prior to starting out on a trail or a bike ride across town.”

The 4th of July is just a few weeks away and while fireworks are legal for adults to purchase in Iowa, Roth says that makes it easier for kids to get their hands on explosives. “They are not safe for children. They can cause serious burns. There’s the potential to start a fire,” Roth says. “Supervision is absolutely key, even with sparklers or bottle rockets that kids might have more access to them. We want to make sure they’re paying attention to using it appropriately and under the supervision of a parent.”

Roth says it’s best to leave fireworks shows to the professionals. A University of Iowa study in 2017 found that after the sale of fireworks were legalized in Iowa, as many as 38% of patients with fireworks injuries were under 18 years old compared to 12% during the three years prior to legalization.