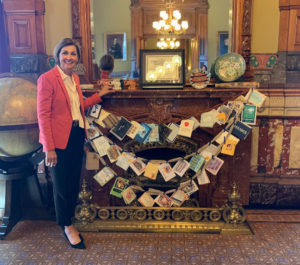 The news conference Governor Kim Reynolds held Thursday is the last to be televised statewide as part of state government’s response to the pandemic.

“A heartfelt thanks to all the Iowans and the notes and the prayers that you’ve sent my way throughout this really difficult time,” Reynolds said in closing, choking back tears. “It really has sustained me and I can’t even begin to tell you how much I appreciate those notes and cards that I’ve received.”

Back on Sunday evening, March 8, the governor’s staff quickly organized a news conference to announce the state’s first three positive cases of the coronavirus. By mid-March Reynolds was holding news conferences nearly every weekday. 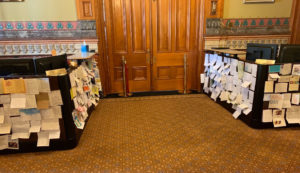 Notes on the desks of the governor’s office.

Yesterday, Reynolds thanked Iowa PBS for making the technical arrangements to broadcast her news conferences during the pandemic.

She also thanked the interpreters who relayed the governor’s remarks in sign language and in Spanish. Reynolds announced she’ll return to having news conferences once a week.