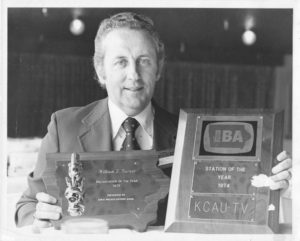 A television pioneer who managed two stations in Sioux City died this week at the age of 90 at his home in Naples, Florida.

Lindblade says Turner was heavily involved in community organizations, served on the Crazy Horse Memorial board, and was on the National Association of Broadcasters board of directors for several years.

“So many things, that I never knew how he kept up with it,” Lindblade says. “…At one time, Channel 9 had over 100 employees.”

After 20 years at Channel 9, the station was sold and Turner was hired across town to be the manager of KTIV, Channel 4 in Sioux City. Dave Nixon was working in radio when Turner hired him to be a TV weatherman, then Nixon wound up working as a news anchor for Turner at both stations.

“I enjoyed my career,” Nixon says. “…I can’t thank Bill Turner (enough) for all I learned from him.” 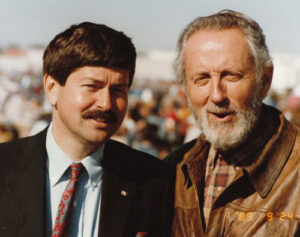 Turner’s tenure at Channel 9 started when Sioux City had only two TV stations and Channel 9 carried both CBS and ABC programming. Turner switched the station to being exclusively affiliated with ABC and served as board president of the country’s ABC affiliates.

After Turner moved to Sioux City’s NBC affiliate, he hired several staffers from his former station, including Jim “Canyon Kid” Henry, the long-time host of the “Kids Corner” program.