You are here: Home / Agriculture / Turkey producers hoping to get some federal relief funds 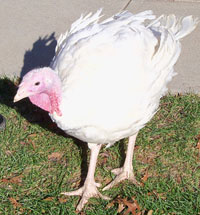 There’s still no word from the U.S.D.A. on requests from Iowa leaders to help the state’s turkey producers recover from serious production problems caused by COVID-19.

Iowa Turkey Federation executive director Gretta Irwin says the pandemic brought a sharp drop in sales and created a backlog of turkeys to be processed. “Iowa’s turkey farmers were impacted by the COVID virus by decreased sales in restaurants,” Irwin says. “As people locked down for those three-plus months and did not go out and eat at a lot of quick-serve restaurants that serve a lot of turkey deli meats, we saw those sales go down.”

Many Iowa restaurants closed or saw a significant drop-off in customers as they shifted to carry-out or delivery only during the height of the pandemic. “That has obviously created an excess inventory in the processors’ warehouses,” Irwin says, “and then that is going to now adversely affect the turkey farmers as they look to cut back production to try to work through that excessive inventory.”

Irwin says federal funding is critically needed for the state’s turkey producers as well as for the processors that were hit hard by the pandemic.  “We’re asking for some support for those farmers who are going to be asked to not produce turkeys because of this excess inventory,” Irwin says. “For the processing plants, we are taking advantage of a lot of the other food assistance programs that the government is providing to food banks and to school foodservice programs.”

Both of Iowa’s U.S. senators and the state’s agricultural leaders have asked the U.S.D.A. for assistance for turkey producers. In their letter, they asked that agency economists work to devise a formula that allows this niche sector of the nation’s poultry industry to get the help it needs. Iowa is the nation’s seventh-largest turkey producer and ranks fifth in turkey processing.