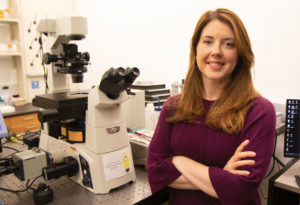 An Iowa State University researcher is working on a test you can take at home to find out if you have COVID-19.

Robbyn Anand and other researchers won a $55,000 grant for the “COVID Initiative” from the Research Corporation for Science Advancement. “One of the things that was very clear is that inexpensive at-home tests are needed for COVID-19 detection,” Anand says. “So that gave me the idea that we could use an existing technology that has been developed by our lab and modify that so it is capable of detecting COVID-19.”

Anand is an assistant chemistry professor and says the test would indicate the presence of a protein linked to the virus. “Decided to design the test around detecting this protein in urine, but then on the advice of the panel that reviewed our proposal — we are also pursuing the detection in saliva,” she says.

They are hoping to have the test ready by this fall when kids would be going back to school.  The test would be similar to a home pregnancy test where a strip would turn color to indicate you have the virus. She says the difference is they use an electric field within a paper strip to accumulate that protein over time.

“So, the test would take a little longer — closer to 10 to 20 minutes–  we are optimizing the time now. And that allows time for us to accumulate what we are looking for over the test line. And that increases the sensitivity to what is needed for viral detection,” according to Anand.  Anand says working with infectious material can raise many issues — but they are able to do the research without that risk.

“The good thing is we are able to access this protein in a form of it that is known to not be infectious — so that we can do our tests by adding that to urine samples and saliva samples.  At the very earliest stages we worked with artificial biofluids,” Anand says.  She says the test would be used to let you know if you need to see a doctor.

“We are aiming for accuracy that’s competitive with the existing swabbed-based tests,” Anand says. She says if you take the test and find it positive then you could know to take precautions to avoid spreading the virus and then make an appointment with a doctor.  She says they want to find a company that can mass-produce the test and keeps the cost affordable.

“Because of the similarity to a pregnancy test — which runs about five dollars — I do think the components would be somewhat more expensive because of the power requirement and some added materials we have to put into the test,” Anand says. “But I still think that it would be somewhere in the neighborhood of 20 dollars. That’s our goal.”

Anand says they also need someone who can produce millions of tests.