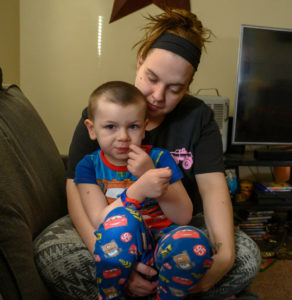 Nearly one-quarter of Iowans live in a “child care desert” while the annual cost of child care can be higher than public university tuition.

More than 930 licensed child care and in-home centers have closed during the pandemic, and estimates say Iowa could lose half its child care slots to COVID-19. Sheila Hansen, at the Child and Family Policy Center in Des Moines, says some providers closed because they’re afraid of the virus.

Hansen says, “They just had to sit down and say, ‘Can I do this anymore? You know, I don’t think we can do this. I can’t risk bringing in children who could be passing something on to me.” Abbee Nielson ran Hope Learning Center in Chariton, the only licensed child care center in rural Lucas County. Despite high demand, Nielsen says the center wasn’t operating at capacity because starting pay for teachers is $8.35 an hour and she struggled to keep rates affordable.

“I have parents texting me,” Nielson says. “Just one last night said, ‘Hey, I have a family.’ Their in-home decided not to do daycare anymore and she has no child care, ‘Can you help out?’ and I was like, ‘I would love to, but I can’t.'” Nielsen recently left the non-profit learning center for a teaching job.

The new director, Mackenzie Stites, says the pandemic has the center facing yet another challenge. Enrollment has dropped by 40-percent after she and Nielsen worked so hard to recruit teachers. “It’s a little discouraging just because things were going so well,” Stites says. “And now it’s like, ‘Are we going to have to rebuild that? Are we going to have to start over again?'”

Polk County resident Kelly DeJoode is a single mother to a four-year-old and she is cutting back her hours at an assisted living facility to 32 hours a week in August. Otherwise, DeJoode says she would make too much money to get state child care assistance. She got a small raise in 2018 which boosted her child care costs from 17 dollars a week to 180 dollars a week.

“I would have had one paycheck and my paychecks were between $700 and $800,” DeJoode says. “And my rent was $575 of that. There was no way I was going to be able to live off $175 after I paid my rent.” Governor Kim Reynolds announced child care as a priority during her Condition of the State speech in January and a flurry of child care bills were making their way through the legislature, until the session was suspended in mid-March due to COVID-19.