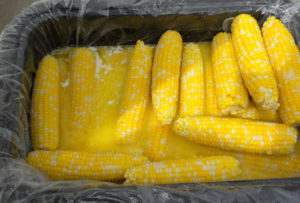 A small stretch of cold weather is going to keep sweet corn from being available by the Fourth of July this year for one grower who often has the first corn on the market.

Mike Penick grows corn near Carlisle and has this assessment of how the crop is doing. “Well, that’s an open-ended question there,” he laughs, “some if looks excellent. Some of it because of the yearly growing conditions — the corn looks okay — we are just kind of thin on population. We just don’t have as much out there as we would like.”

Penick says his first sweet corn will likely be ready the week after the holiday. “Somewhere between the 8th, tenth, twelfth of July, somewhere right in the. It’s kind of open to how the heat comes along,” Penick says. He says the Fourth of July delivery date is what they hope for, but don’t get every year.

“I’ve got about 20 years of records and about 50 percent of the time we get it ready by the Fourth of July,” Penick says. He says everything was going good for earlier harvest until one setback. “The cold we had in late April and May. It just sit there and done nothing for the longest period of time,” according to Penick.

Penick says the growing conditions had been pretty good since that slowdown. “We’re actually sitting in a pretty garden spot for rainfall and so we haven’t gotten the big rains either. So it’s growing extremely fast right now, but it just got cut back so much from the early cold,” he says.

Penick was planting another round of corn when he talked with Radio Iowa about the season. He tries to stagger planting to keep corn available throughout the season. “We try to sell for about 60 days — so this corn I’m planting right now will come roughly about Labor Day or such a matter,” Penick explains.

Penick says his other vegetables have been doing well too — including tomatoes. “I waited on the tomatoes until after the frost that came there in May and they took right off and have tomatoes…I have no greenhouse vegetables, everything is outside. They’re progressing pretty good,” Penick says.

Wet conditions delayed the sweet corn last year and the first corn was on the market at about the same time Penick predicts for this year.