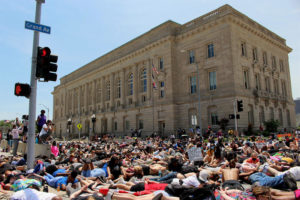 Protestors outside City Hall in Des Moines on June 6.

The ordinance establishes a committee to review systemic bias in the police system and directs police officers to intervene if another officer uses excessive force. The council is also creating a task force to study ways to make marijuana possession the lowest priority for law enforcement.

Councilmember Josh Mandelbaum co-sponsored that proposal. Mandelbaum says, “Addressing the way we enforce our marijuana laws is one of the small ways that we can move towards racial justice and a community that works better for everyone.” The ordinance was first introduced nearly two years ago but it took on new urgency in the wake of protests against police brutality.

Betty Andrews, president of the Iowa-Nebraska NAACP negotiated changes to the ordinance, including forcing a police officer to interfere when a colleague uses unreasonable force. Andrews says, “Which means that if someone has their knee on the neck of someone gasping for air they should interfere.”

Andrews says the ordinance is a good step but the city must do more. For instance, she says the community should have more authority to hold police accountable for misconduct.