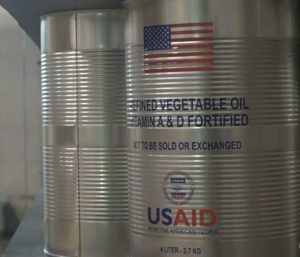 Goodwill of the Heartland is expanding from its traditional retail operation to a soy oil manufacturing business in Johnson County.

Plant manager Jon Olson tells KCRG TV that they plan to hire about 40 employees once it is fully operational.  “I want to help people that don’t normally get an opportunity to learn a job like this, to learn it, and to use their skills elsewhere if they feel they want to,” Olson said. Olson will lead the day-to-day efforts at the Coralville plant, located off Highway 6 in one of the old Hawkeye Foodservice Distribution buildings.

Jessica Schamberger is the Vice President of Operations for Goodwill of the Heartland.  “It’s soybean oil, which Iowa’s a top soybean-producing state. We knew we could create great jobs for people with disabilities, and then we’d have the chance to impact people around the world because the oil is packaged for humanitarian food aid,” Schamberger says.

The plant is still in the process of interviewing candidates for jobs, and Olson said while much of the job is automated with robotics, it is up to him to teach staff how everything works and how to troubleshoot any potential issues. Schamberger says it is their goal to serve as a training ground to allow people to take those highly sought after skills to other potential manufacturing jobs.

“We want to help build skills that help people get jobs outside of Goodwill too,” she says. She says they helped place 701 people into employment last year, and says if they can scale people up with the work traits that they need to be successful in manufacturing then that has a big mission impact for Goodwill.

Olson agrees. “For me, I’d want whoever works here to come away with a sense of accomplishment that they learned something and that they can take those skills and use them anywhere,” Olson says.

The U.S. Agency for International Development says the oil will go to food insecure areas worldwide, providing a takeaway for those outside the plant, and working at it.