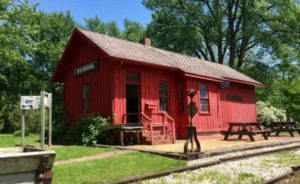 An investigation of the Boone County Historical Society by the state auditor’s office cites bad budgeting and insufficient oversight by the society’s board of directors.

“I think for a lot of people in Boone County who care deeply about their county’s history this is pretty frustrating because there was a lot of mismanagement that went on over the last few years that has put them now in a position where it’s going to be very difficult going forward,” State Auditor Rob Sand told Radio Iowa.

The Boone County Historical Society oversees a handful of properties, including former First Lady Mamie Doud Eisenhower’s Birthplace in Boone. Former board members successfully sued to stop the sale of the site. The society’s executive director was fired and the board was replaced by early 2019.

Officials from the City of Boone asked the state auditor’s office to investigate the society’s books. The review found that at the beginning of 2016, the group had about $350,000 in the bank, but by the fall of 2018 that had dwindled to less than $13,000. Sand says auditors determined a fundraiser in 2017 was actually a big money-loser.

“A fundraiser that loses $39,000 is quite problematic when you’re looking at the fact that’s being done with public funds,” Sand said.

Boone’s city council had provided a portion of hotel-motel taxes to the Society and the Boone County Board of Supervisors also provided taxpayer support to the group. Auditors couldn’t find documents to properly account for nearly $44,000 of spending, plus they determined the group’s former executive director had signed a new contract in early 2018 that cited Canadian rather than U.S. law. Sand said he’s “quite confident” state auditors haven’t seen that before when reviewing decades of records in Iowa public entities.

“Yet that happened here and was signed by four individuals on the board,” Sand said.

Auditors found the society paid to repair the Boone County History Center when its facade collapsed and could not to use a state grant to cover those costs. The Society also oversees the Kate Shelley Park and National Railroad Museum in Moingona which is in disrepair and has been closed.

The Historical Society’s current board of directors issued a written statement, saying it “feels better knowing about these past occurrences, so the board can better prevent similar issues going forward.” The statement indicates the board is working on ways to improve and reopen its museums soon.