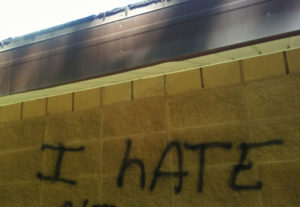 Grafitti was spray painted on the bathroom building near the War Eagle Monument.

The graffitti, which was discovered Tuesday, was directed at both the black community and local police. Police Sergeant Jeremy McClure says the area where this happened is more than just a city park.

“We’ve been trying to address concerns brought up to us by the Native American community about the sacredness of War Eagle Park,” McClure says. “Not only is it a city park but it’s also held very sacred by a lot of the Native community because it’s also a graveyard for a Native family.”

The vandalized building is on the road that leads to the monument and the gravesite of War Eagle and several members of his family. “When people go there and leave trash or deface property, they’re being extremely disrespectful to the memory of that family that had a huge part in the history of Sioux City,” McClure says. “We’re hoping to raise awareness so people will start treating that area with the reverence that it deserves.”

War Eagle was buried on the bluff in 1851, and later, two of his daughters and some of his grandchildren were also laid to rest there.  “We’re planning on trying to increase patrols of that area and try to curtail some of these issues,” he says. “We’re also working with local Native American leaders to increase the understanding of that park and hopefully do more to raise the reverence of that area.”

Anyone with information about the graffitti should contact Sioux City Crimestoppers at 712-258-TIPS.