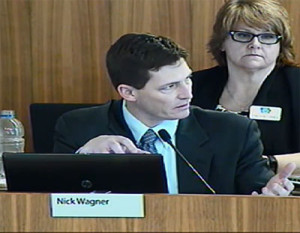 A member of the Iowa Utilities Board is resigning to take a job with an energy company that operates in Iowa and seven other states.

Nick Wagner has been a state utility regulator since 2013. He’s leaving in July to work in Denver for Black Hills Energy and will be the company’s VP for Colorado Regulatory Affairs and Policy. Wagner just completed a one-year term as president of the National Association of Regulatory Utility Commissioners.

Wagner lives in Marion and previously worked as director of quality management for the ESCO Group in Marion, an electrical contractor for residential and commercial projects. He served one term on the Marion City Council and two terms in the Iowa House of Representatives.

Wagner, who is 46 years old, is a native of Wyoming. He holds a degree in biomedical engineering and a masters in electrical engineering – both from the University of Iowa.