You are here: Home / Human Interest / Some turning to RV’s as a way to travel and keep social distance 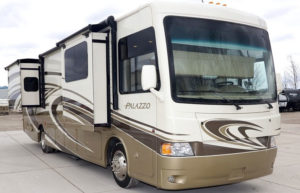 The pandemic has many Iowans skittish about traditional means of travel and they’re seeking out alternative ways to heed the call of the open road.

Nick Smith, sales manager at Good Life RV in Webster City, says they’ve seen record sales of recreational vehicles for two months in a row. “We’ve seen a big jump, just based on the fact that folks don’t want to go to hotels, airports, things like that, but they still want to get out and do something with their family,” Smith says. “We think that’s the reason for the jump.”

Smith says it’s simple economics that with the increased demand for RVs, the supply is beginning to dwindle, not just in Iowa but nationwide.  “Right now, dealers are running out of stock,” Smith says. “Typically this time of year, we’d have maybe 300 RVs to choose from and right now, we’re less than 90 total between new, used, travel trailers, fifth wheels, motorhomes, fold-downs, things of that nature. It’s going to be slim pickings here for a little bit.”

Smith says the season has been excellent for RV sales — and for rentals. “Right now, we’re sitting at 100 units sold for this month. We were about 100 last month. Sales are doing well. Campgrounds are full,” Smith says. “The reports that I’m getting from folks that are coming in is that campgrounds are packed and you’ve gotta’ get out there early if you want to get a spot.”

While COVID-19 forced a temporary shutdown of Iowa-based Winnebago Industries, production of motor homes at facilities in Lake Mills, Forest City, Waverly and Charles City started back up in early May. In March, the Forest City-based Winnebago reported fiscal second-quarter net income of just more than $17 million, a drop of 20% compared to the same quarter last year due to the pandemic.

Winnebago’s third-quarter earnings will be released this morning.