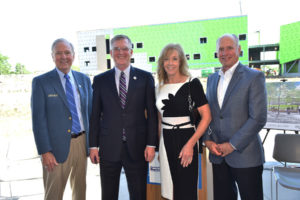 Des Moines Area Community College (DMACC) made a big announcement Wednesday about its program that allows students to start there and finish their degree on campus through the University of Northern Iowa.

DMACC President Rob Denson says a gift will help fund the building used for the program. “Mark and Jill Oman gave the first million dollars to UNI which will then come back — a half million this fall and then a half million next fall — for the first two years of this five-year lease agreement,” Denson says.

Denson says this is the only majority-minority campus in the state.
“Over 50 percent diversity and with the need to increase diversity in everybody’s workforce, and with all the issues about implicit bias and discrimination that we’ve discussed since the George Floyd killing — getting individuals to a better state of economic viability is a great step for them,” according to Denson.

He says getting a better education can make a huge difference. “You really can’t get a good job without having skills. And there are so many great jobs being developed all the time — and if you are not ready to take those, you’re left out,” he says.

Denson says the partnership with UNI is about providing easy access to the programs.
“All you have to is commit some time,” Denson says, “and with the governor’s Future Ready Iowa, Last Dollar Scholar Program. You’ve got the Pell dollars coming out of the federal government. Often times it’s not a matter of money, the funding is there to cover your tuition and books.”

Students in the program will start with the ability to graduate with an online degree in Bachelor of Liberal Studies (BLS) or Criminal Justice (BAS). A Bachelor of Applied Science degree in Managing Business and Organizations is planned and will be specifically designed for graduates of DMACC’s two-year Associate of Applied Science programs (AAS).
UNI also offers a Bachelor of Arts in Elementary Education through online and on-site courses at other DMACC campuses, including Ankeny and Carroll.