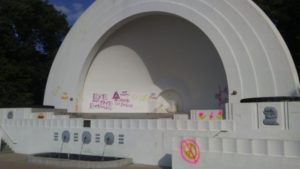 The Grandview Park bandshell is the latest Sioux City landmark defaced by vandals. The damage was discovered early this morning and a suspect was apprehended at the park. An unknown number of people spray-painted graffiti in the band shell and along the front and sides of it.

“Bandshell paint is a special paint that’s like a two-part epoxy,” Bach says. “Because of the nature of the construction, it’s over concrete so you can’t just use regular latex paint. Also, the removal is a little more difficult because of that paint.”

Bach says it won’t be a quick fix, either, as another nearby area of Grandview Park was also damaged.

“It may be a little longer process than normal but we will get that removed as quickly as we can,” he says. “We also have some spots on the concrete within the Rose Garden and that will have to be high-pressure washed with some heat to it to get that removed.”

Bach’s reaction to the damage was like most people’s would be as he surveyed what the vandals had done.

“It’s disappointing but we’ll move on,” he says. “We’ll take care of what we need to do.” Bach says it’s too early for a total estimate on what the repairs will cost.

Police report officers found a man hiding in the park who matched the description of a witness as one of the vandals. Officers arrested 23-year-old Esteven A. Avila of Sioux City for criminal mischief and possession of a controlled substance.

Earlier this week, vandals painted racist graffiti on a building leading to the War Eagle Monument, an area that’s considered sacred in the Native American community as War Eagle and several members of his family are buried there.